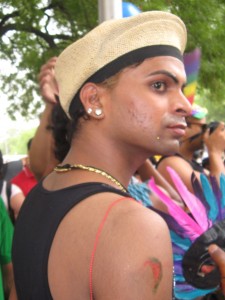 Megan and Adam were getting late so I asked them to go but I stayed for the party. I was wandering around and stopped by a bus stop and sat there for a while. Two people, who seemed rural, came and sat next to me. It seemed like they had also seen the parade and were talking about it. One of them was really angry about the parade. He was swearing at the government and the people who had organized it. One of them was saying that people are making fun of Indian culture openly and the government allows them to do so. I think he has not read Ramayana, Kamasutra or have visited Khajuraho because Ramayana talks about hijras whose sex practices are also like gays, Kamasutra also talks about homosexuality and Khajuraho is stuffed with homosexual sculptures. 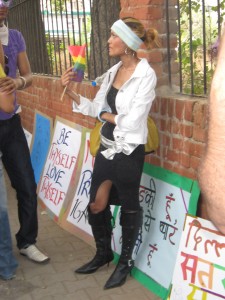 She had most number of posters

I have not visited Khajuraho but I have read Ramayana and have looked at Kamasutra book and after looking at these books, I feel like India has the oldest gay culture in the whole world and gay culture was accepted in our society but the British made it a crime. I spent an hour just wandering here and there and then came back to the place where bus was supposed to start from. I met a guy there who was a 20 year old student of Delhi University. I was just sitting near the bus and he came and sat next to me and started talking. He said that he was feeling very confident and open after attending the parade. He said that he was also shy before coming to the parade but after attending the parade he did not have this problem of being shy about himself anymore. 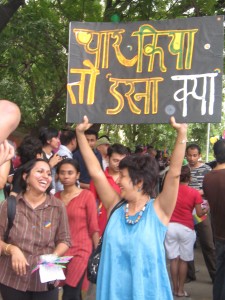 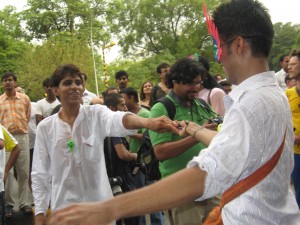 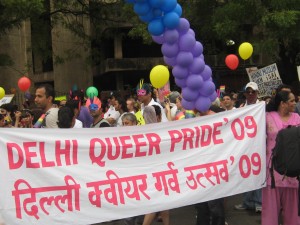 He wanted my advice to dress himself look sexy in the party. He had an extra sleeveless t-shirt which he had brought specially for the party, and he had a piece of cloth which he wanted to rap around his waist so that he can look sexy. I am not a fashion expert but I tried my best to help him look as sexy as he could. After talking to him I was wondering what would happen if he is forcibly married to a girl. He did not need to marry a girl. It would be bad for both his bride and he himself. A lot of homosexual people in India are forcibly married to the opposite sex which sounds like a crime to me. 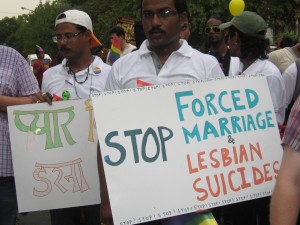 I also notice one other thing- that a lot of homosexual people were calling each other by feminine and funny names, like a lot of them using the word randi (slut) for each other. I did not understand why they do it. Hijras always take a feminine name but homosexual people usually don’t use feminine names but it seemed like they like doing it. One other very interesting thing for me was that homosexuals were making fun of hijras. When we were going to the party place by a bus, there were a lot of hijras also in the bus. 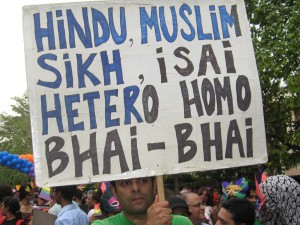 Hijras are known for their clapping and hijra songs. All the hijras were singing their hijra songs and were clapping in hijra style but a group of homosexual people, who were being interviewed in the bus, were making fun of the hijras all the time. They would be like “Oh my God! Where did they come from, these hijras, randi… There was a guy who stood up and said loudly that if anyone has a coin of Rs. 1, then please give to these randi hijras, otherwise they will keep clapping and singing. I know that there was no anger behind it but they would always make fun of them and they seemed so friendly to each other. It was a fun ride, though. 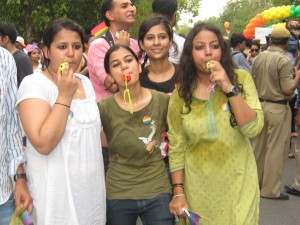 I liked that bus ride a lot and would not forget it ever. People were so happy, they were laughing, singing, hugging each other, making fun of each other… it was so fun. Finally the bus stopped and we arrived at M Lounge Bar in Sector 15, Noida. I had thought that I was going to a place where they would be having food and a little bit of drink and people would be talking, that’s all; but this place was something beyond my imagination. Actually it was a disco. As I stepped in, everything I saw was new to me because I had never ever been to a disco before. 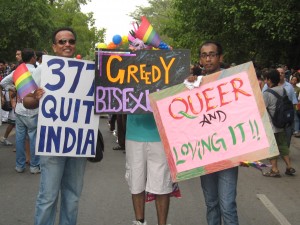 People were dancing, drinking, hugging, kissing… I had never seen anything like that before. There was a bar also in the disco and I also thought to drink a bit but I did not know that things were super expensive there. Entrance was free for the participants of the parade but the rest of the things were really expensive like drinks, food, cigarette… I drank a shot of whiskey and a bottle of beer but I still wanted to drink more because the atmosphere was thrilling there. I was enjoying myself a lot. 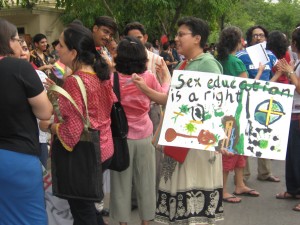 We really need it

Finally I had to come out of the disco and buy some alcohol from a shop and drank it. Before buying the alcohol I met the organizer Mr. Amit Agrawal and talked him for a while. He was too drunk to talk actually so he asked me to talk with one of the other organizers, who was a 25 year old student. He said that he was also a gay and when I asked him if he had informed about it to his family he said “No”. When I asked him if he thought that his parents would allow him to get married with his boyfriend, he said he did not know about it. But he would not like to get married with a girl. 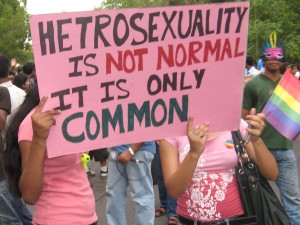 He said that they had organized the parade without taking any financial assistance from any other NGO or institution or charities. Everything was organized by a group of gays. They had contributed money from their own pockets to make the event happen. He was also very high and he gave me his mobile no. and asked me to call him the next day so that we could talk more. After talking to him I got in the disco again. Now the party had reached at its top. �Whatever I saw there was completely new to me. 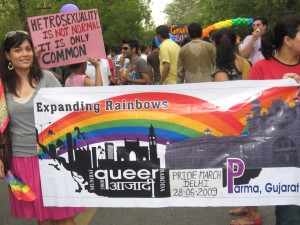 I saw many gay couples kissing, hugging and dancing together. I saw a couple of a 60+ and a 20 year old guy. They were also dancing and kissing, actually they had the longest kiss. I think their kiss lasted for something like two hours. There were a lot of hijras also who had their partners and they were kissing. I saw few lesbian couples also. I noticed that the daily visitors of that disco would come and sit at a corner and see things going on. I am sure they had also not seen anything like that before. I could easily see their shocked and curious face. 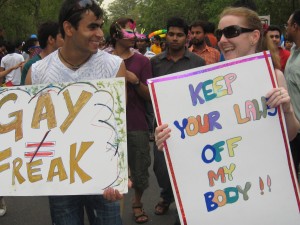 My body my business

I don’t think that any of the daily visitors danced that night. They were just watching what was going on that night. It was so fun. I was enjoying myself a lot. It felt a little bit strange at first to me and I was also shocked like other daily visitors but after spending few minutes everything seemed normal to me. I just felt like people were enjoying themselves and the most important thing for me was that they were happy. The feeling of freedom and joy is always awesome and I could easily see that feeling there. 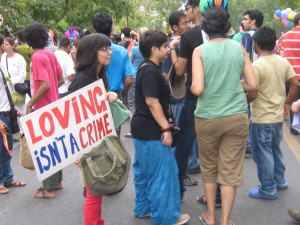 It was funny that one of the guys came to me and started dancing and touched my ass but I did not know what to do. He touched me for few seconds but after no reaction from my side, he left me and joined someone else. I really liked the way he respected my feelings and I think the same way we should respect their feelings as well. None of the homosexuals made fun of me, or insulted me or tried to disturb me because I was a straight but I don’t understand why straight people always make fun or insult homosexuals. Why don’t straights also respect gays’ feelings the way they respect straight people’s feeling? 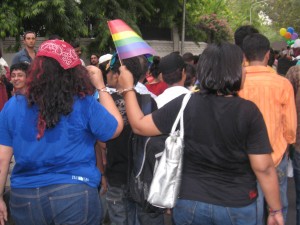 Now the party was over I headed back to home. I really enjoyed the party.It was really a fun night. I felt like it was one of the best things I had ever done with myself by participating and supporting the parade, and the obviously party was also so fun. I was supposed to talk with the two members of the organizing committee next morning and I was really looking forward to it but I could not because when I called them next morning, both of them said that they had drunk too much last night and now they just wanted to sleep so I could not talk with them. 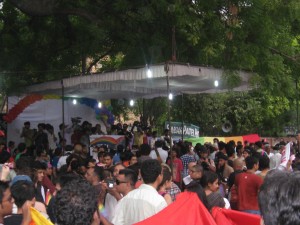 I will try to talk with them next time when I go to Delhi. Mr. Amit had asked me to organize the Gay Pride Parade in Benares as well but I am not sure if Benares is ready for this kind of event. My overall experience was awesome and I really felt good to be in the parade. I saw the pain of the gay community in India, I listened their issues, I talked with them and finally I would say only one thing that they also deserve equal rights, equal rights for everything, and social acceptance. I don’t know how long will it take for them to get equal rights in India but one thing is very sure that it will take a long time for the gay community to get social acceptance in India. 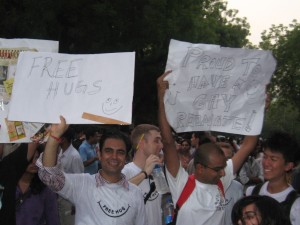 Lots of hugging in the parade

They gay community is everywhere in each and every part of this world, somewhere it is hidden because of social pressure and somewhere it is open because of more awareness and education and liberalization. I was reading a newspaper article about an NGO that works with the gay community in Varanasi and it said that NGO was working with 1500 gays only in Varanasi. I am sure this number is not a real number, the real number is a lot bigger than this because most of the gay people do want to make their relations public because they are not accepted in the society. 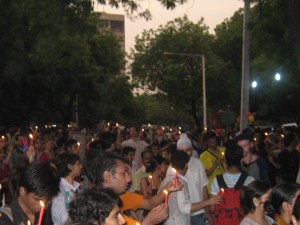 Participants with the candles

And finally they are married forcibly to some opposite sex partner and their life is destroyed. I don’t understand what anti-gay people have to do with acceptance of gay culture. They don’t harm anyone. I think gay culture is all about having sex with the same sex partner or interaction towards the same sex, nothing else, rest of the things are just like anyone else whether they are straights, hijras, transgender or whatever… And who are we to stop anyone from exposing their thinking or stopping them from what they want to do with themselves? 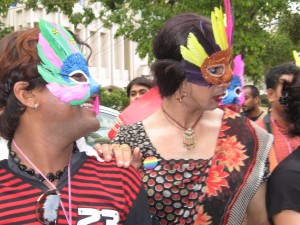 Gay culture is only different inside the room and how could someone know what anyone what does inside the room? �It’s bullshit idea to think that we should even try to know what someone is doing inside the room. Outside room activity is same for everyone, whether they are homosexual or straight. When anybody is born in India, they get a few of the basic human rights and freedom of speech, freedom of thinking and equal rights for everyone are a few of those basic human rights. I think gay culture as just different thinking, nothing else, and everybody has rights to think whatever they want to think. 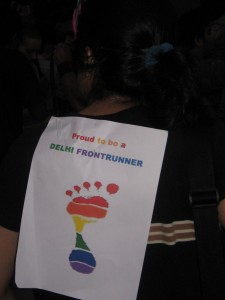